NBL Indigenous Round will be staged across Rounds 14-15 of the season and will celebrate, recognise and acknowledge Indigenous culture across Australia and New Zealand.

Indigenous Round will tip-off on Friday March 4 when the Adelaide 36ers host the South East Melbourne Phoenix at the Adelaide Entertainment Centre.

Following the success of previous Indigenous Rounds, all clubs will wear uniforms designed by local artists. The jerseys are on sale now from nblstore.com.au

These are the stories behind each jersey.. 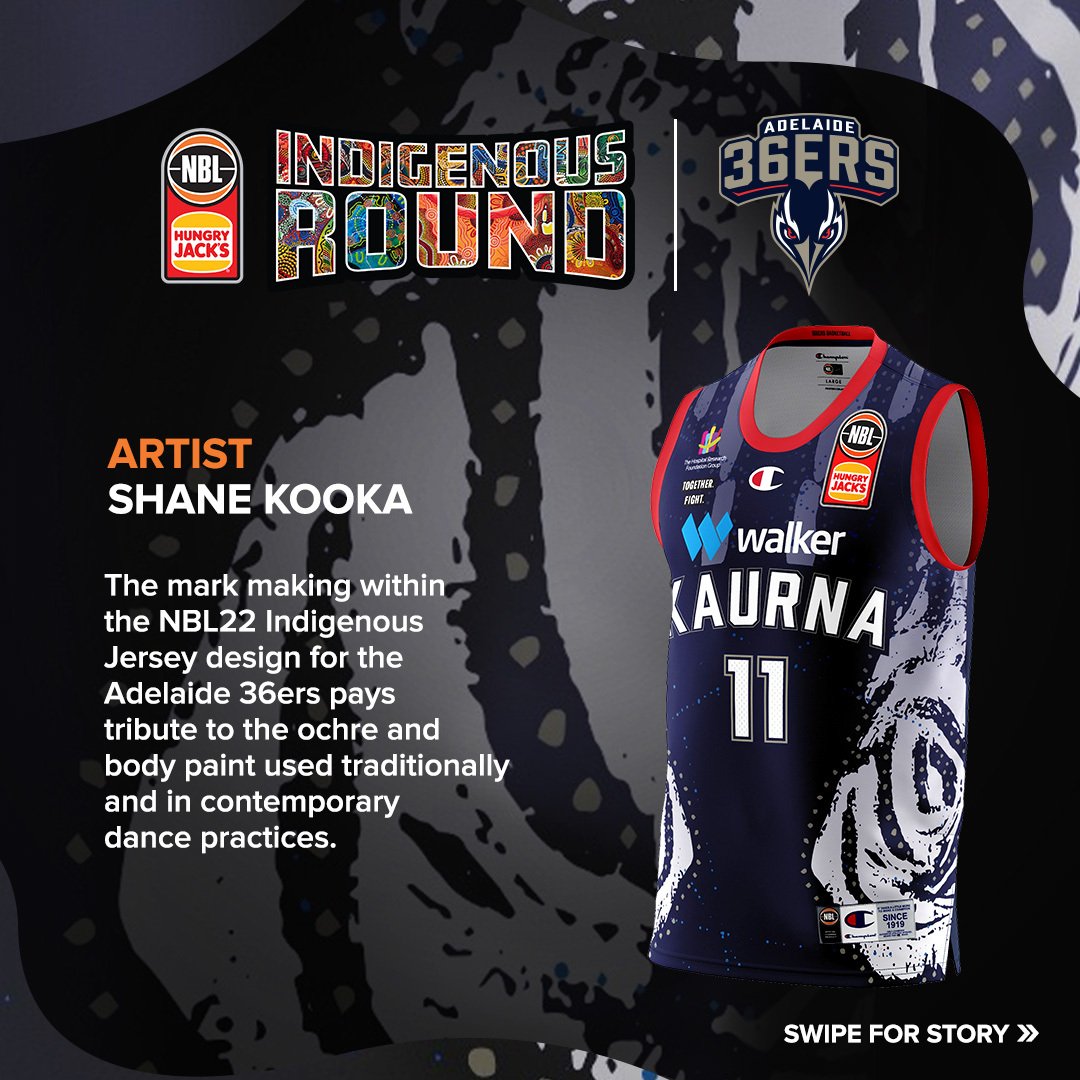 The mark making within the NBL22 Indigenous Jersey design for the Adelaide 36ers pays tribute to the ochre and body paint used traditionally and in contemporary dance practices.

Body painting and mark making is a traditional art form, that continues to hold deep spiritual significance and importance to first nations people.

Body markings are symbolic of identity and were used traditionally to showcase stories, the persons tribe, totems, connection to their ancestors and family groups.

Capturing the abstract contemporary markings created by the artist’s hands and then transforming them into a digital format, gives the artwork an opportunity to see no boundaries in which the markings can be placed.

The artist’s first experience connecting to their culture was through tradition dance before moving onto mark marking and art.The artist’s goal with this design was to recreate a contemporary style of mark making, it was to give the players a sense of what it feels like to be painted up before a big dance, celebration, ceremony or going into battle. The Brisbane Bullets NBL22 Indigenous Jersey design represents the Bullets story as they continue their commitment to reconcile with Aboriginal and Torres Strait Islander people.
They have been very successful with their connections with the Traditional Owners of the land on which they work, play and live.  Understanding their needs and history is how the Brisbane Bullets have become so grounded as a team.

The Southern Cross for many Aboriginal and Torres Strait Islander people represents “The Dream Time’ and was used by many to navigate through not only their lands, but to travel across others to meet new people. Today the Southern Cross is known more for its placement on the Australian flag as a symbol of the navigation the sailors have taken to find their way too Australia.

It plays a very important part of this story: Connecting the Brisbane Bullets to the past, grounding them to their homelands and guiding them through their Reconciliation journey.

The symbols in yellow on the sides of the design represent the Brisbane Bullets team as it goes to battle with the other 9 clubs within the NBL.

The symbols of the people in the middle of the design show the families, staff, sponsors, and wider community who are committed to the Brisbane Bullets journey. 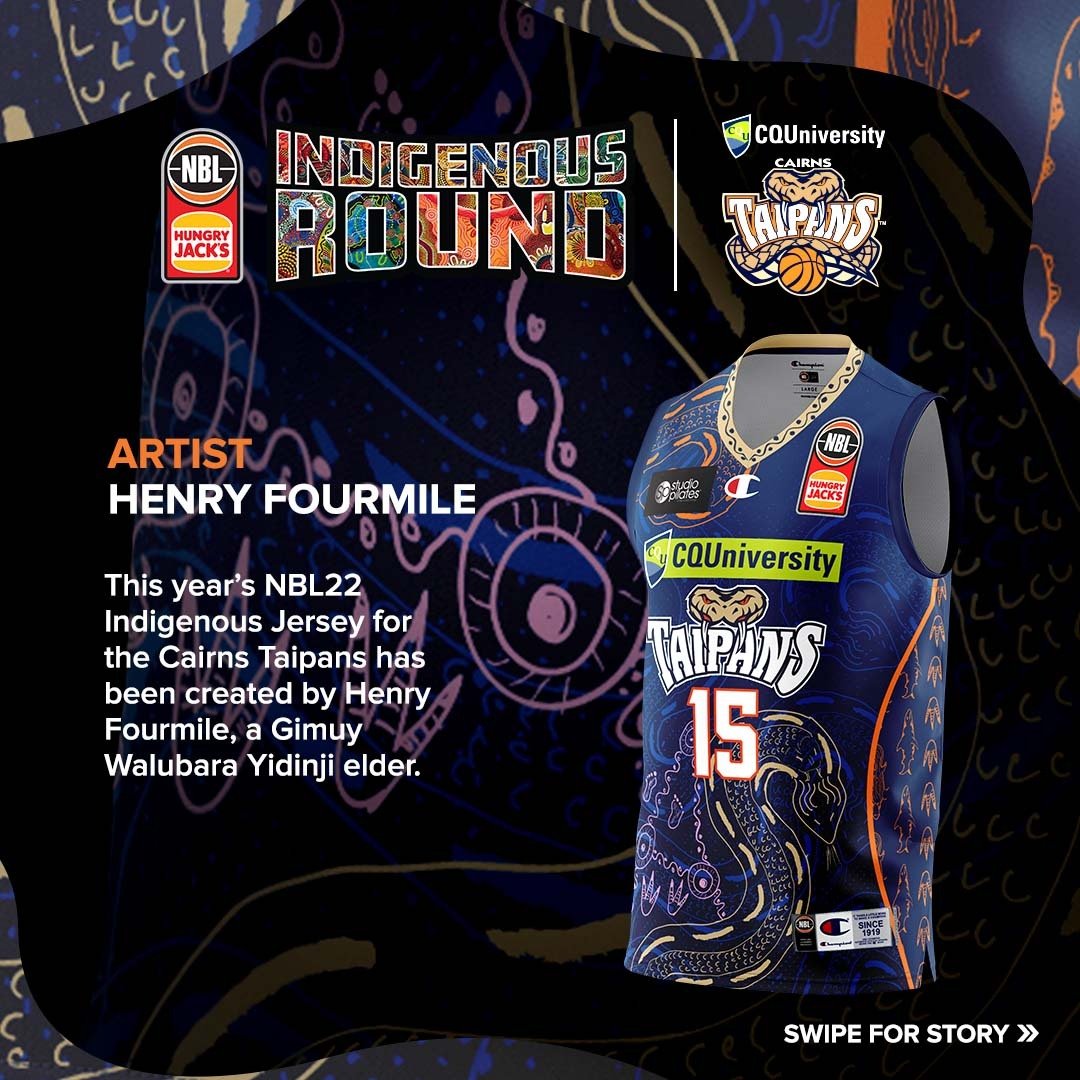 This year’s NBL22 Indigenous Jersey for the Cairns Taipans has been created by Henry Fourmile, a Gimuy Walubara Yidinji elder.

The inspiration for the artwork was the players and their fierce, competitive spirit. The kit is adorned with native Australian animals (including a Taipan) and other creatures that have a sting or bite – to warn their opponents that they are dangerous.

The art has been created to inspire the team to be victorious and motivate them to be deadly. It also represents Cairns, as a place people visit from far and wide. This artwork was created for the Illawarra Hawks’ NBL22 Indigenous jersey as a digital design.

The artist wanted to keep the design in line with the club's mascot and colours but recreating the hawk with a more traditional style design detailed with Aboriginal dot and line work.

The idea of creating a gathering symbol was always an idea the artist wanted to implement and it worked perfectly with placing the basketball in the middle.

The gathering symbol represents the club, the team and the community coming together celebrating the NBL, and in particular, the Indigenous round.

The lower half of the artwork represents Sea Country where the Illawarra Hawks are located in, Dharawal Country, with the waves forming the ocean connecting to the land.

The players are represented in this section symbolising their connection to the land.

The two white dot symbols represent the community of supporters and fans coming together as one to celebrate the special occasion.

They are symbolised in the design as a way for the club to show its respect for its supporters and First Nations people. Melbourne United’s Indigenous Jersey for NBL22 has been proudly designed by a proud Wurundjeri, Dja Dja wurrung and Ngurai illum wurrung woman who has been a practising artist for over 25 years, living in Narrm (Melbourne).

The design highlights the carving culture of Wurundjeri. The flowing design represents the roots of the Baban Darrang (Mother Tree). Her roots resonate from the centre and go deep into the biik (ground) sending signals through her roots to her saplings. This is symbolic of Baban Darrang being 'culture', and the wyett (saplings) being the 'next generation of leaders'.

First Nation art styles are regionally based, making them unique from each other. The narrative of place can only be told by a Traditional Custodian of that place. All linear elements honour Mandy Nicholson’s third great uncle Berak (William Barak) who carved wangim (boomerangs), and mulga (shields) and painted ancient ceremony and celebrations.

The main centre swirl comprises of swirling lines which represent the smoke from our Welcome fires and the motion of water which forms part of all our layers of Country. 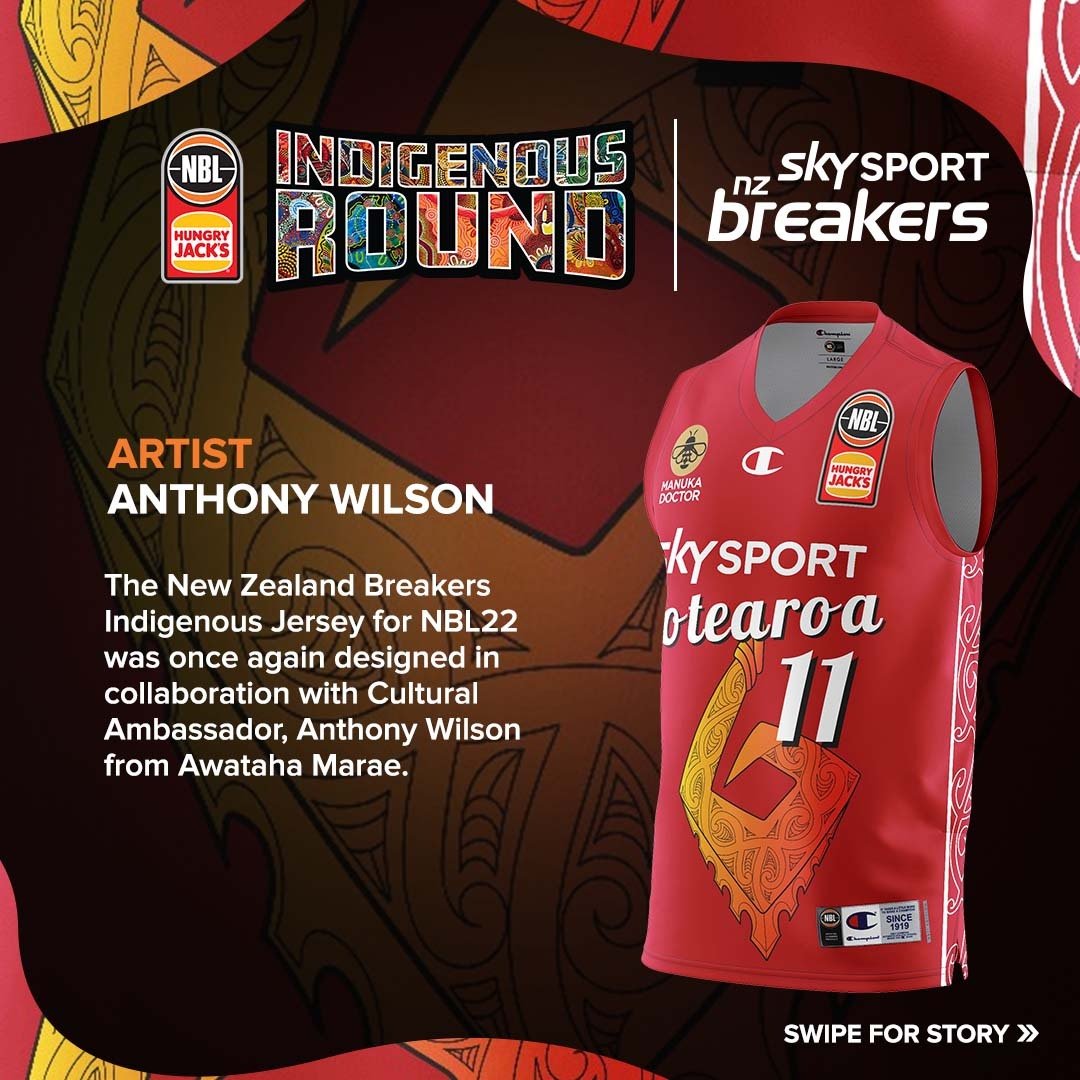 The New Zealand Breakers Indigenous Jersey for NBL22 was once again designed in collaboration with Cultural Ambassador, Anthony Wilson from Awataha Marae.

Anthony tells the story of Maui, a common ancestor throughout the Pacific and Aotearoa, who is represented through the fish hook. Te Ika a Maui refers to the story of how Maui fished up the North Island. The name Aotearoa refers to the name our ancestor Kupe gave to these islands.

The orange/red colour refers to the story of how Maui slowed the sun. "Tamanui I te Ra" The artist of the Perth Wildcats NBL22 Indigenous Jersey chose to tell the story of their 40 years of history and the land in which it calls home.

The red, white and yellow represents the ochre found in the foothills of Wadjuk country. It is traditionally used by Indigenous peoples to paint on themselves, walls or rockfaces.

The middle circle represents the Perth Wildcats themselves. It’s a circle of meeting with the semi-circles representing the players and staff. The straight lines represent the spears used to attack. It’s a group that’s going into play another team - it’s not just a game, it’s a war.

Surrounding the middle circle are 10 smaller circles, representing the club’s 10 championships and across the lower part of the jersey are five additional circles which celebrate its five MVP award-winners.

Separating the two sets of circles is a pattern which represents both past players and the Wadjuk people. The white dotted section is dedicated to a favourite player of the artist, Scott Fenton, who was tragically killed at 24 years-of-age in 1989

The design element on the shorts represents the Darling Range, which is the resting place of the Wagyl – the rainbow serpent responsible for the creation of the waterways and landforms which form the Noongar country. The name that was chosen for the South East Melbourne Phoenix NBL22 Indigenous Jersey is "Ngiyani" (pronounced guy-anni) which means "we all" in Pama-Nyungan.

This is the Kamilaroi language, in which some of the artists ancestors were resided, giving inspiration to share their language.

"We all" is in reference to the club’s core value of meaningful community connection, which the artist leant on heavily for this design and means we are all in this together. 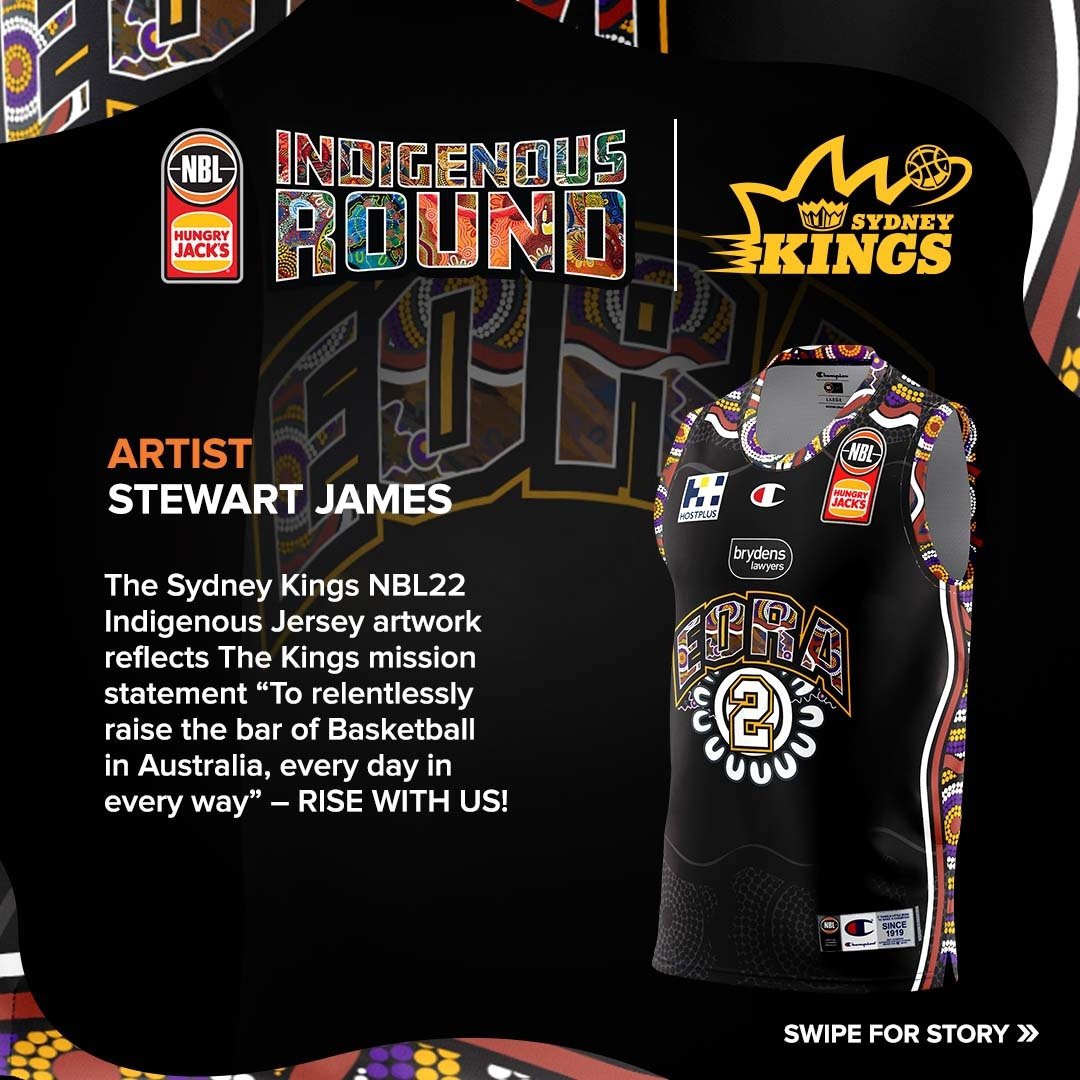 The Sydney Kings NBL22 Indigenous Jersey artwork reflects their mission statement “To relentlessly raise the bar of Basketball in Australia, every day in every way” – RISE WITH US!

The outer edge of this artwork symbolises the strong ancestral grounds on which the Sydney Kings represent. This deep legacy holds the strength and the resilience that is still present within all Aboriginal and Torres Strait Islander communities today. This strength allows the current playing group to use this power and knowledge, to influence how they will honour those people and players from the past and present.

The inner part of the artwork symbolises the story that echoes this deep legacy. The white journey lines that connect to the centre meeting place symbol channel all the strength and energy of those people and players from the past and present. The ‘U’ shaped symbols represent the people who continue to share the stories and ensure the legacy and the knowledge continues to move forward.

The centre meeting place represents where the story is right now. The story is continuing the rise of all that has come before and where it will be tomorrow! The Tasmania JackJumpers’ NBL22 Indigenous Jersey showcases palawa Tasmanian Aboriginal art, found on rock carvings across our state, some dating back more than 14,000 years old. The cultural symbols – known as petroglyphs – are made by using a traditional engraving practice to expose different colours beneath the rock surface to create the ancient symbols. These engravings are sacred to the palawa people, Tasmanian Aboriginal people, and are a true representation of the depth of history of belonging to our island.

These symbols are important connections to lutruwita [Tasmania], connecting people to place. The petroglyphs are incorporated into the jersey that includes the design of a jack jumper on a mound. Tasmanian Aboriginal culture is quite unique – palawa artists do not use dot paintings found elsewhere in Australian Aboriginal culture. Instead, our palawa artist used lines and other cultural symbols to create the story that connects Tasmania’s native insect, the jack jumper, to ancient aboriginal artwork – the petroglyphs.

The Tasmania JackJumpers have announced the signing of shooting guard, Milton Doyle ahead of the 2022/23 Hungry Jack’s NBL season.
3 days ago
NEWS

The Perth Wildcats have announced that coach Scott Morrison will depart the club due to family reasons.
3 days ago
NEWS