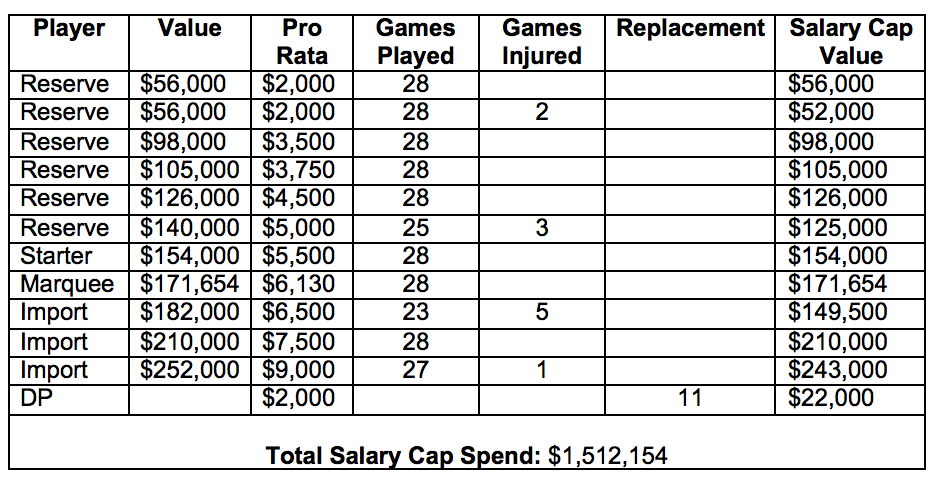 Marquee Players There are a number of mechanisms in place allowing clubs to manage their salary cap spend whilst still getting quality players on fair and reasonable wages. The first of these is, of course, the marquee player status – the rule which allows teams to pay a high-level local mostly outside the cap. A marquee player must be an Australian or New Zealander and a club can have a maximum of four of these players. That being said, teams are only allowed a total of four marquee and restricted (import) players combined. Now, contrary to popular belief, marquee players are not completely paid outside the cap. What actually happens is the NBL caps the value of these players so that, no matter what they are getting paid, only a set amount is included in the salary cap. The amount included in the cap for a club’s first Marquee player is $171,654. However, that value increases for each additional Marquee guy on your roster. A second Marquee player will cost you $228,873 in the cap, a third is valued at $286,091 while a fourth costs $343,309. Of course, to this point teams have not tended to go for a third or fourth Marquee guy as that would mean they’d have either one or zero imports. Two? Well yeah, that happens. The Sydney Kings, for example, had only two imports for much of last season and while they did, they had two of their non-restricted players – Andrew Bogut and Brad Newley – classified as Marquees. When the Kings released Deng Acouth and signed a third import in Ray Turner, Newley was re-classified and his full pro rata value started counting towards the cap. Interestingly, the Perth Wildcats only had one player – Nick Kay – classified as marquee for all of last season, despite having just the two imports. It simply worked out better for them financially to play it like that, considering the value of their other deals. A few examples of players who were classified as Marquee players during at least part of NBL19 are Daniel Johnson (Adelaide), Nathan Jawai (Cairns), Todd Blanchfield (Illawarra), Chris Goulding (Melbourne), Bogut (Sydney) and Kay (Perth). So, what do we think about this rule? Well, what I will say is that without it a whole bunch of our best local players almost certainly wouldn’t be in the league. The rule is in place to encourage clubs to target local players, such as Bogut or Mitch Creek, and pay them what is required to get them to come home to the NBL and play.

It's official. The @SEMelbPhoenix have got their marquee man in Mitch Creek ??

More on the first signing made by the NBL's newest franchise ?? https://t.co/nC8rbBe86I#RiseUpPhoenix pic.twitter.com/yDl44Wsuru — NBL (@NBL) December 3, 2018

This rule has already helped bring other players home from Europe and may make it possible to see guys like Joe Ingles and Patty Mills return to the league one day. Of course, the marquee player rule not only helps to bring players home, it also serves to keep players in the league as well. Without it, you could almost guarantee that a guy like Nathan Sobey would’ve signed in Europe this off-season and not with Brisbane. The same applies to Kay’s decision to stay in the NBL this time last year. Yes he moved clubs but he stayed in the league. Goulding, Johnson, Blanchfield… without the Marquee player status those guys would almost certainly be maximising their earning potential in Europe right now instead of playing in the NBL.   Imports There are a couple of key rules that relate to players who are classified as ‘restricted’. Firstly, as mentioned earlier, teams can sign up to three restricted players, or 'imports', to their roster. Most imports negotiate with clubs in US Dollars. To give clubs some relief and encourage them to recruit the best players they can afford, the league has set a conversion rate for the purpose of the Salary Cap at 92 cents. This doesn’t make any difference to what the player actually gets paid, but it does allow a much smaller number to be applied to the Salary Cap and as such means teams enjoy some relief from having to pay luxury tax on the full amount. There is also the Next Stars program – an initiative aimed at attracting some of the best talent from across the globe to come to the NBL to develop their game and prove themselves instead of doing so in the US college system. These players are in addition to the eleven selected by the club and are, in the ordinary course, paid for by the NBL so their wage is exempt from the Salary Cap. When the NBL signs a Next Stars player, all of the clubs are given an opportunity to present a case to the player as to why he should join that club. The league, club and player then work together on the best fit for him. Next Stars are considered to be non-restricted players, no matter where they are from and the programme is intended to be agnostic with regards to a player’s nationality. Lastly, there is what is called a Special Restricted Player. These are players from a select number of Asian countries that the NBL has selected as possible areas to market the NBL and bring more supporters in from outside of the Australian or New Zealand market. Those countries have changed slightly over time but are currently China, Philippines, Taiwan, India, South Korea, Singapore and Japan. If a club signs a player from one of these countries, they are exempt from the Salary Cap and are generally treated in the same way as a local player.   The Five Player Salary Maximum Rule One rule the system has to ensure there is an element of talent spread across the league is the Five Player Salary Maximum rule. This rule is designed to stop a club from simply signing all the best players – having a bench full of talent who would be starters on other rosters – and essentially buying a championship. The rule states that the five lowest-paid players on each roster cannot have a combined player value of more than 40% of the Salary Floor. In other words, every team needs to have some cheaper players on their roster to balance out the higher-priced talent. With this season’s floor set at $1.287 million, the combined value of each team’s bottom five players cannot exceed $514,800.   That's it! That’s how it works. Of course, there are a number of other components that help to bind the whole system together but those are the main features. The NBL salary system is essentially a soft cap, a luxury tax and a bunch of other rules that all blend together in a heap of complex ways to help develop the league. It’s a multifaceted mixture of encouraging top athletes to play, inviting passionate, ambitious owners to invest and continually growing a sustainable, competitive competition. That’s a challenging balance to strike and, as we’ve seen with the reforms in the recent CBA, it’s a process that involves constant tinkering. Now, if you’ll excuse me, I need to lie down.
NEWS

Buford Opens Up on ‘Tumultuous 36 Hours’

Buford Opens Up on ‘Tumultuous 36 Hours’

Scott Roth to Lead JackJumpers for Next 3 Seasons

The Tasmania JackJumpers have announced that NBL Coach of the Year Scott Roth will remain as Head Coach of the JackJumpers for at least the next three seasons after inking a new contract extension.
3 days ago
NEWS

Perth GM of basketball Danny Mills says the club will explore all avenues to build a roster that will get the Wildcats back into the finals next season.
3 days ago
NEWS

Retaining superstar duo Duop Reath and Antonius Cleveland is a priority for the Illawarra Hawks in free agency, according to club GM Mat Campbell.
3 days ago
NEWS

Hugo Besson has continued his strong NBA Draft Combine with an impressive performance in a day two scrimmage.
3 days ago

Scott Roth to Lead JackJumpers for Next 3 Seasons